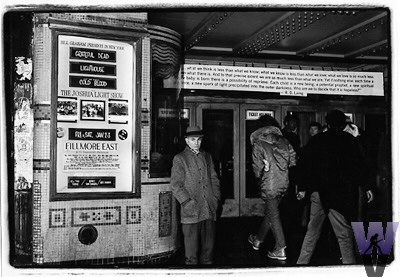 The Cathedral Of Rock & Roll

A Letter from Bill Graham
from page 45 of the May 6, 1971 issue of The Village Voice

Ever since the creation of the Fillmores, it was my sole intention to do nothing more, or less, than present the finest contemporary artists in this country, on the best stages and in the most pleasant halls.

The scene has changed and, in the long run, we are all to one degree or another at fault. All that I know is that what exists now is not what we started with, and what I see around me now does not seem to be a logical, creative extension of that beginning. Therefore, I am taking this opportunity to announce the closing of the Fillmores, and my eventual withdrawal from producing concerts.

The process will commence with the formal closing of Fillmore East on Sunday, June 27, 1971.

My reasons are as follows:

1) The unreasonable and totally destructive inflation of the live concert scene. Two years ago I warned that the Woodstock Festival syndrome would be the beginning of the end. I am sorry to say that I was right In 1965 when we begin the original Fillmore Auditorium, I associated with and employed "musicians." Now, more often than not, its with "officers and stockholders" in large corporations - only they happen to have long hair and play guitars. I acknowledge their success, but condemn what that success has done to some of them. I continue to deplore the exploitation of the gigantic-hall concerts, many of them with high-priced tickets. The sole incentive of too many has simply become money. The conditions for such performances, besides lacking intimacy, are professionally impossible according to my standards.

2) I had always hoped to be able to present artists whose musical worth I felt was important: artists whose music was valid, whether commercially popular or not. There are more quality artists today; but many of those that do exist do not appear in public regularly. Therefore, in order to stay in business, I would be forced to present acts whose musicality fell below my personal expectations and demands. I could do this, and in having to book fifty-two weeks a year it becomes tempting because it is so much easier to do. Thousands might even to come to these concerts, but I personally would prefer not to present them. For who would gain?

3) With all due respect for the role they play in securing work for the artists, the agents have created a new rock game called "packaging"; which means simply that if the Fillmore wants a major headliner, then we are often forced to take the second and/or third act that the agent or manager insists upon, whether or not we would take pride in presenting them, and whether or not such an act even belongs on that particular show. To do so would be to relinquish the essential responsibility of being a producer, and this I will not do.

4) In the early days of both Fillmore East and West, the level of audience seemed much higher in terms of musical sophistication. Now there are too many screams for "More" with total disregard for whether or not there was any musical quality.

5) The time and energy that is required for me to maintain a level of proficiency in my own work has grown so great that I have simply deprived myself of a private life. At this point I feel that I can no longer refuse myself the time, the leisure, and the privacy to which any man is rightfully entitled.

6) For six years, I have endured the abuse of many members of the public, and press (in most instances people who did not know me personally). The role of "anti-christ of the underground" has obviously never appealed to me. And when I asked for people to either judge me on some factual personal knowledge, or at least base their opinion on that which I produced and gave to the public, I was rarely answered.

7) Rock has been good to me in many ways, but the final and simple fact is that I am tired. The only reason to keep the Fillmore in operation at this point would be to make money. And though few have ever chosen to believe me on this point, money has never been my prime motivation; and now that it would become the only possible motivation to continue, I pass.

My personal future will begin with a long-needed rest. What will follow, I do not know. The several hundred good people who work at the Fillmore, maniacally dedicated to our standards, will, no doubt, go on to other creative things on their own. Fillmore West, as you may know, has been allocated for demolition for a long time know. It will neither relocate nor be reopened.

The "Fillmore" will become a thing of the past. I will remember with deep emotion and fondness the great and joyous moments of that past. I sincerely thank the artists and business associates who contributed to our success. But, I warn the public to watch carefully for what the future will bring.

The rock scene in this country was created by a need felt by the people, expressed by the musicians, and, I hope, aided to some degree by the efforts of the Fillmores. But whatever has become of that scene, wherever it turned into the music industry of festivals, 20,000-seat halls, miserable production quality, and second-rate promoters - however it went wrong - please, each of you, stop and think whether or not you allowed it, whether or not you supported it regardless of how little you received in return.

I am not pleased with this "music industry." I am disappointed with many of the musicians working in it, and I and shocked at the nature of the millions of people who support that "industry" without asking why. I am not assured that the situation will improve in the future.

But beyond all these viewpoints, I truly wish to express my overwhelming appreciation to the people, who, over the years, gave their time and devoted energy to working at the Fillmores. To them, and to many, many musicians who grew in stature without ever copping out, and to those admirable patrons who both refused to support marathon rip-offs and who even took the time to helpfully criticize me for the errors I made - to all of you, my fondest thanks and farewell.

Bill Graham, who escaped Nazi Germany to become America's leading promoter of rock musicians and who helped develop the mass rock concert format that drew audiences totaling in the millions, was killed Friday in a helicopter crash about 25 miles northeast of San Francisco. He was 60 years old.

Mr. Graham was one of three people who died when their helicopter hit a 200-foot utility tower and crashed in a fiery explosion about 10 P.M., said officials of his company, Bill Graham Presents.

The charred remains of the Bell Jet Ranger helicopter, which had been flying over marshes near Vallejo, were still tangled in the power lines yesterday. Electricity to 23,000 homes was disrupted for hours. The other two victims were the pilot, Steve Kahn, and Mr. Graham's companion, Malissa Gold. They were returning to the rock impresario's home in Corte Madera after a concert, by Huey Lewis and the News, which he had promoted. Influence Across Media

For a quarter of a century, Mr. Graham was a central figure in organizing, producing and marketing rock music across the nation and around the world in all formats from live concerts to records, films, videos and television shows.

He first gained fame in the 1960's presenting concerts at the Fillmore theater in San Francisco and later at its East Coast spin-off, the Fillmore East, a seedy old vaudeville theater on the Lower East Side of Manhattan. Eventually he shut down the theaters but continued his business, based in San Francisco.

As the popularity of rock grew, Mr. Graham pressed into the vanguard of the emerging phenomenon of rock concerts staged in large arenas, outdoor stadiums and parks.

He helped the careers of fledgling groups, and the headliners of his shows were a compendium of rock and folk music stardom: the Rolling Stones, Sly and the Family Stone, Jefferson Airplane, Santana, George Harrison, the Doors, Jimi Hendrix, the Allman Brothers Band, Bruce Springsteen, Bob Dylan, the Grateful Dead, Janis Joplin, Joan Baez, Joe Cocker and Crosby, Stills, Nash and Young, among many others. Money for Social Causes

He also directed many concerts and tours that raised millions of dollars for a variety of social and political causes.

They included a legal defense fund for student protesters arrested at Columbia University in 1968, the 1985 Live Aid concert to fight famine, the 1976 Save Our Cities concert, two Crack-Down concerts at Madison Square Garden in 1986 against drug abuse, and the 1986 Conspiracy of Hope tour and 1988 Human Rights Now international tour, both for Amnesty International.

In 1987 he staged a July Fourth American rock concert in Moscow, where nervous Soviet officials ordered thousands of soldiers to ring the stadium as as a precaution.

Known as a hard-driving businessman with a personality as mercurial as some of the stars he placed on stage, Mr. Graham also had a reputation for demanding high standards, whether in the acoustics produced by the sound equipment or the quality of his musicians' performances.

He delved into numerous sidelines, from mechandizing T-shirts and souvenirs to commissioning concert posters that have now become collectors' items and works of art in their own right.

Mr. Graham's beginnings were perilous. He was born Wolfgang Grajonca to Russian Jewish emigrants in Berlin, and two days later his father was killed in an accident. Eventually, his mother placed Mr. Graham and one of his sisters in an orphanage.

As World War II tore through Europe, the two children fled through France. Mr. Graham made it, but his 13-year-old sister starved to death along the way, which he said made him feel guilty for the rest of his life. He later learned that his mother and another sister were killed in gas chambers in Germany. Awarded for Service

Adopted by a family in the Bronx, he graduated from DeWitt Clinton High School. Drafted into the Army in the Korean War, he was court-martialed twice for minor violations but went on to win the Bronze Star and Purple heart in combat duty.

He worked as a cab driver in New York and received a degree in business administration from City College. He went to California to work as a statistician for the Southern Pacific Company, and his other jobs included being a paymaster for a construction contractor and statistician for a trucking company.

But show business lured him, and quit his job in 1964 to become the business manager of the San Francisco Mime Troupe. When local censors banned a show in 1965, he raised money for legal fees by staging a benefit in a loft. It was so successful that he organized two more benefits, using the old Fillmore. Soon he was producing regular concerts, psychedelic lighting effects were introduced, and a new subculture and form of entertainment were born.

He was married and divorced, to Bonnie McLean, in the 1960's and they had one child, David. He is also survived by another son, Alex; a stepson, Thomas Sult, and three sisters, Rita Rosen, Esther Chichinsky and Sonia Svobl.